Nigerians will be able to open an eNaira wallet and conduct transactions by simply dialling *997 from their mobile phones under phase two.

Furthermore, merchants and consumers with bank accounts will be able to use the NIBSS Instant Payment (NIP) to transfer and receive eNaira to any bank account. 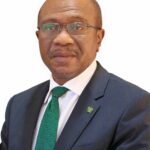 “The second phase of the project has begun and is intended to drive financial inclusion by onboarding the unbanked and the underserved users leveraging offline channels.

Hence greater success is envisioned for the project with phase two expected to deliver more gains with the target of eight million users based on estimation using the diffusion of innovation model,”

said Godwin Emefiele, Governor of the Central Bank of Nigeria.

The volume and value of transactions on the platform has also reached above 200,000 and N4.4billion (around US$10.34 million) respectively.

The CBN’s Deputy Governor of Economic Policy Dr. Kingsley Obiora said the CBN had blazed the trail with the launch of the eNaira, by responding to the yearnings of digital payment system, adding that other central banks were currently understudying Nigeria’s model of the digital currency.