Funding will be used to help the 2017-founded superapp scale in Uganda and Nigeria, and provide new payment and financial services solutions.

Initially launched as a two-wheel ride-hailing platform, the startup now provides rides, parcel delivery, food and shop, payments, savings and other financial services. The company has accumulated over 1 million customers in Uganda and Nigeria, along with over 25,000 drivers who have completed more than 40 million orders in the two countries. 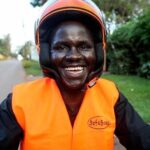 “SafeBoda welcomes Google to their community and are excited to continue to drive innovation in informal transportation and payments in the boda boda (East Africa) or okada (West Africa) industry.

This vital industry is the lifeblood of Africa’s cities and powers economic development. SafeBoda is thrilled that leading global companies such as Google see the importance of backing startups working towards these goals,”

Google’s Africa Investment Fund was launched in October this year, as part of the global tech giant’s commitment to invest US$1 billion in tech-led initiatives in Africa over the next five years. The US$50 million investment fund is dedicated to sub-Saharan Africa-based early and growth-stage startups.

It joins other initiatives by Google targeting the continent’s startup landscape, including the Google for Startups Accelerator Africa. The three-month accelerator is aimed at seed to Series A startups based in Africa. Google also backs the US$3 million Black Founders Fund, through which it provided equity-free funding to 50 African tech startups, including 16 fintechs, in October this year.