African fintech hubs have grown rapidly in the past few years, leading to pockets of fintech development across the continent.

According to Findexable’s Global Fintech Rankings Report, 14 of the top Middle East and African fintech hubs came from the African continent. These included the usual suspects, but more interestingly, seven of these fintech hubs were new additions. Rwanda, Seychelles, Tunisia, Zimbabwe, Somalia, Cameroon and Ethiopia all made it to the Findexable index for the first time. 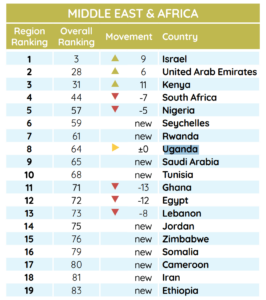 Here are some of the biggest African fintech hubs and what you need to know about them.

Nigeria continues to be one of the biggest and most predominant African fintech hubs. The country is home to two fintech unicorns – OPay and Interswitch – as well as a number of ‘soonicorns’ and other popular fintech companies. Flutterwave, another African unicorn, grew out of the country as well. Nigeria was also in the fintech headlines for the launch of the eNaira (although challenges are on the climb for the central bank digital currency), and was the top destination for fintech funding last year.

The boom in fintech in Nigeria comes on the back of rising adoption of financial services. Nearly half of the Nigerian population has bank accounts, and users have been keen on services such as electronic money transfers, and savings and investment products.

At the same time, there appears to be some friction between regulatory bodies and fintech companies in Nigeria. The Central Bank of Nigeria has previously suggested that it would keep a close eye on fintech startups, not long after it froze the accounts of four fintech companies for violating its guidelines.

South Africa is a focal destination for startups in Africa. One report suggests that South Africa has a “clearly defined startup ecosystem with multiple players across capabilities.”

Although Nigerian companies have emerged at the top of the funding leaderboard this year, last year it was South African fintech companies that raised the majority of fintech investments, with US$112 million. Compared to this, South Africa-headquartered companies Jumo and Ozow raised big ticket investments, through a US$120 million venture round and a US$48 million Series B respectively, just this month.

Fintech penetration is also high in South Africa – 94% of the population has regular access to the internet, while 67% have a bank account. The country is also relatively fintech friendly, with 30% of Johannesburg’s startups coming from the fintech sector.

Mobile money is big in Kenya, home to Safaricom’s M-Pesa solution that sparked a mobile money revolution across the continent. Transactions through mobile wallets and phones comprise 87% of Kenya’s GDP. Meanwhile, mobile money agents handled 59% more cash (or US$5.8 billion) as of January 2021, as compared to the same period last year (US$3.6 billion).

Mobile money accounts in Kenya reached 66.59 million in January this year (in a population of a little over 55 million). The country also has a strong mobile money agent network, comprising 287,410 agents.

Crypto is another popular fintech sub-sector in Kenya. Crypto adoption in Kenya was amongst the highest across the world, and the country also saw some of the largest transaction volumes take place on P2P platforms.

Ghana is another one of the African fintech hubs that have seen mobile money adoption surge. Currently, transactions via mobile wallets and phones represent 82% of the country’s GDP, with US$11.5 billion processed per month as of February 2021.

There’s also a regulatory push for fintech in Ghana, through initiatives such as the digital financial services (DFS) policy and the fintech and innovation office established last year at the Bank of Ghana.

Egypt-based regulators have been making moves to encourage the development of its fintech sector.

For instance, an Egyptian Central Bank Law put in place last year discussed the regulation of fintech companies in the country, highlighting sectors such as cashless payments, digital banks, and cryptocurrency. Another draft bill approved this year would also allow its Financial Regulatory Authority to issue licenses for non-banking financial companies and fintech startups.

Private players have also joined the fold. Three Egyptian banks committed EGP 1 billion (US$63.6 million) to an Egypt fintech fund that would support the growth of this sector in the country. Elsewhere, digital investments, payments and banking are all sectors expected to become billion-dollar industries by 2025.

Uganda has come a long way in its fintech journey, ever since MTN Uganda received the first no-objection letter for its mobile money service. Here too, mobile money remains the most popular sector by adoption, with about 24.3 million registered accounts as of 2019.

An earlier report notes that the fintech sector in Uganda remains comparatively smaller than global counterparts. However, this sector registered an average annual growth rate of about 35% between 2017 and 2018, indicating tailwinds in this sector. Moreover, formal financial inclusion in the country stood at just 58%, indicating a large market opportunity for inclusive digital financial services.

Meanwhile, although mobile money and payments remains the most dominant fintech sector in Uganda (much like the rest of Africa), fintech solutions in the space of banking infrastructure, and investment and savings products, have also been able to carve out a niche for themselves, the report suggested.