Released in November, the strategy focuses on increasing the use of digital financial services, and establishing a conducive environment for fintech innovation. The CBE said it will also encourage entrepreneurship, facilitate the integration of startups into the formal economy, and provide MSMEs with access to key resources, including financial services.

No further details on the initiatives the central bank will be spearheading have been released, but the document does highlight the establishment of a conducive legal and regulatory framework, fostering fintech and digital financial infrastructure, as well as ensuring the availability of sustainable finance and economic stability, as key enablers to building an inclusive financial system that provides fair, quality and affordable products and services.

Financial inclusion is one of the main pillars of Egypt’s Vision 2030, an ambitious national agenda launched in February 2016 that aims to eliminate poverty by 2030, achieve social equality and inclusion, develop a robust economy, and encourage innovation, among other goals.

Financial inclusion has increased substantially in Egypt over the past couple of years. Data from the CBE show that bank penetration jumped 131% from 2016 to June 2022. Today, out of the country’s 65.4 million citizens aged 16 and above, 60.6% currently have a bank account, totaling 39.6 million people, the regulator said.

Improved access to financial services comes on the back of a rapidly evolving fintech sector that’s seen increased consumer adoption and soaring funding activity. In 2021, Egyptian fintech companies raised a total of US$159 million, representing a 300% increase from the previous year, according to a report by the CBE’s Fintech Egypt platform. The number of startups has also increased, soaring from just two ventures in 2014 to 112 by the end of 2021. 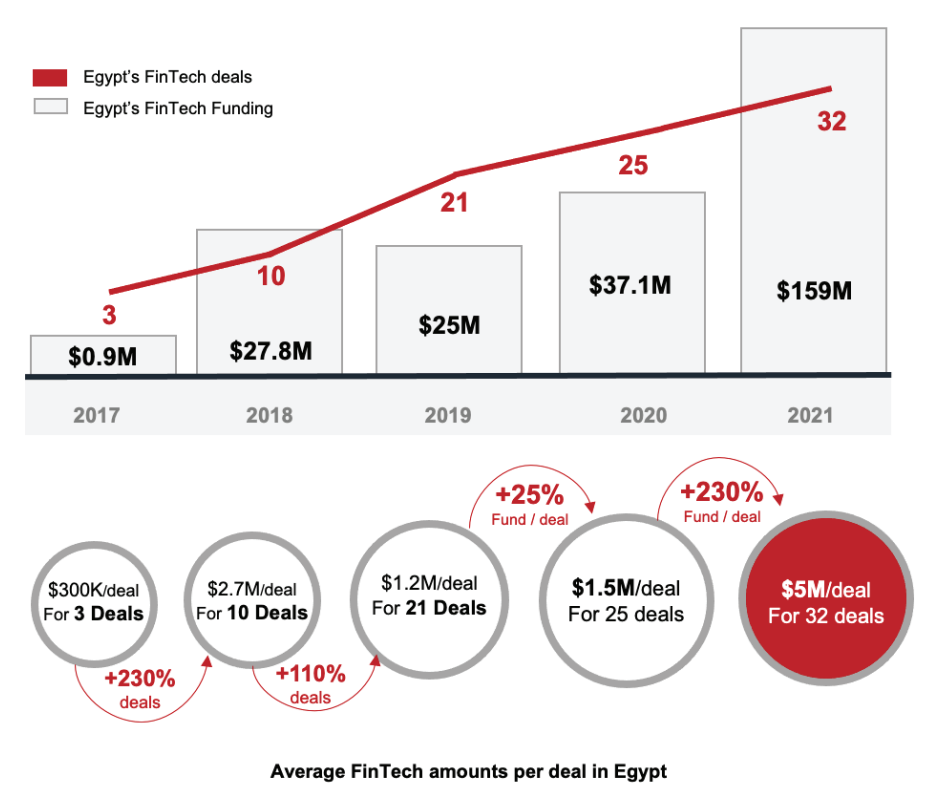 The momentum is continuing this year with fintech startups in Egypt securing US$167 million in just the first half of 2022, already surpassing 2021’s total, a report by Fintech Galaxy says. Notable rounds included Paymob’s US$50 million Series B, ValU’s US$22 million private equity and corporate minority deals, and Thndr’s US$20 million Series A.

The second half of 2022 has been marked by significant deals as well like MoneyFellows’ US$31 million Series B, Blnk’s US$32 million equity and debt funding round, and Telda’s US$20 million seed round.

According to the Fintech Egypt report, Egypt has one of the largest fintech ecosystems in Africa, attracting in 2021 the fourth largest sum of fintech investments in Africa, and the second biggest sum in the Middle East and North Africa (MENA).

Over the past year, several new initiatives have been introduced, setting the stage for further growth in the coming years. These include the EGP 1 billion (US$63.6 million) Fintech Fund, the Digital Financial Literacy Strategy, as well as amendments to the Mobile Payments regulations to support digital lending using behavioral scoring and digital savings schemes on mobile money wallets.

Paymob is a digital payment company that allows online and offline merchants to accept electronic payments from customers using various products and solutions. The company claims more than 150,000 merchants and 16.5 million registered users on its app.

Lucky Financial is Egypt’s leading app for credit products, discounts and cashback rewards. The company has over eight million active users and a merchant network of more than 30,000 stories.