South Africa’s Vodacom Group is planning to launch its Alipay-enabled financial services app VodaPay in Egypt, according to a Bloomberg interview with Vodacom’s CEO Shameel Joosub.

The launch comes after the mobile communication company obtains the necessary approvals to acquire its parent company Vodafone Group’s stake in Vodafone Egypt for US$2.7 billion.

Vodacom first announced that it was partnering with Alibaba’s Alipay to create a financial services “super app” in South Africa in July 2020. The app was then launched in October 2021.

VodaPay is described as a digital shopping, lifestyle and financial platform for consumers and businesses. The app includes lending, shopping, and mobile payments services.

According to Joosub, Vodacom Group is also in talks for a mobile money license in Ethiopia, where it will likely use the M-Pesa platform of Kenyan partner Safaricom. 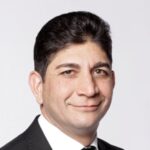 “We see double-digit growth in financial services for the foreseeable future. In Egypt, we want to start the full Alipay platform soon, and we expect to start our mobile-money services in Ethiopia by early next year,”

Industry Consortium Wants To Strengthen The Fintech Ecosystem In Egypt